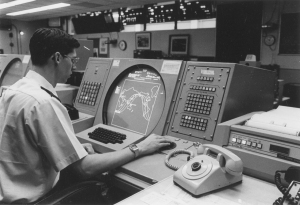 Computers in war have been a fast and ever-changing subject.  There is always a race to come up with the most advanced and improved computerized warfare systems, and the race is still technically within its infancy in the grand scope of human history.

When looking into the past (which really isn’t that long ago) it’s good to see how things have evolved.

“Acknowledging that a “large part of the computer industry makes money from the Defense Department,” Ornstein said he expects that even some defense workers will join CPSR, even if anonymously. So far the group has met with little resistance from the industry except for what Ornstein calls “disgraceful” treatment by the Association of Information Processing Societies (AFIPS), which runs the annual National Computer Conference (NCC).

As he tells it, CPSR applied “well in advance” of the 1983 NCC for permission to set up a stand in the show’s lobby. Hearing nothing from AFIPS, the group reapplied and, finally, on the opening day of the show, it received a note from AFIPS denying permission.

“AFIPS treated us very badly. I’m sure we were refused on political grounds. AFIPS’ bylaws call for the group to be concerned with the social impact of computers and yet they refused us permission.”

Asked about the incident, AFIPS did not respond by press time. Meanwhile, CPSR has applied for admission to this year’s NCC, which is to be held in Las Vegas next July.

“There is apparently a giant fear on the part of industry that organizations like this will rock their boat,” Ornstein says.

CPSR is not alone in questioning the application of computers to nuclear weapons systems, however, nor is it the first organization to do so. In 1970, a group of distinguished computer scientists including Daniel McCracken, Joseph Weizenbaum, and Paul Armer formed Computer Professionals Against ABM, which argued publicly that a proposed antiballistic missile system would be vulnerable to intractable computer problems. In 1982 a small group of people formed Computer Professionals United to do the same sort of tasks in which CPSR is currently involved. Several of its members have now joined CPSR. Meanwhile, in Cambridge, Mass., High-Technology Professionals for Peace is working to find nondefense-related jobs for computer workers and others.

Interestingly, McCracken is lending his expertise to CPSR. He was slated in late January to deliver a talk on the “ethical obligations of computer professionals” to the newly formed New York City chapter of CPSR. Also, Weizenbaum, known as one of the most radical and articulate thinkers on the topic of computing’s social impact, has been active in CPSR’s Boston chapter, while in Palo Alto, Terry Winograd, a pioneer in the field of artificial intelligence, is participating. Says Winograd of CPSR’s mission: “As computer scientists we have access to a certain group of other computer scientists who will listen to us and we also have the expertise needed to demystify computer technology for the general public.”

That demystification lies at the center of CPSR’s goals, suggests Ornstein. “Most of us believe science and technology are important, but they need discussion. There’s probably too much faith in technology. It’s not going to solve all the world’s problems.

“It’s a difficult role, to question technology,” he concludes, “because in this country there’s a feeling that Yankee ingenuity can fix anything.””